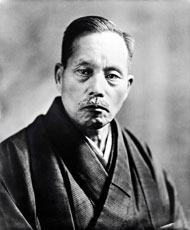 Tsunesaburo Makiguchi (1871-1944) was born in the village of Arahama in present-day Niigata Prefecture, a small port on the western coast of Japan. He spent much of his youth in Otaru, a town in Japan's northern island, Hokkaido.

At the time, Otaru was undergoing a rapid transformation into a model town in the process of Japan's modernization and industrialization. While working as an errand boy at the local police office, Makiguchi read and studied widely, and eventually gained entrance to the Hokkaido Normal School, a teachers training facility in Hokkaido's capital, Sapporo.

It may be that these early experiences of life in a small community whose maritime industry engendered an awareness of the wider world and later in a provincial town undergoing a rapid process of modernization prompted Makiguchi to develop a deeply rational interest in geography as a field of study. He also experienced first-hand the pronounced gap in opportunities between the elite in whose hands power was concentrated and the disempowered masses. These experiences exerted a strong influence on Makiguchi as he settled on a career as an educator.

After qualifying as a primary school teacher, Makiguchi taught for some years in Sapporo, and was also an active member of local teachers' associations, but in 1900 he left Hokkaido for Tokyo. In 1903, at the age of 32, he published his first major work, The Geography of Human Life.

Until he was appointed principal of a Tokyo elementary school in 1913, Makiguchi supported himself and his family through his writing and a variety of jobs in the educational field. He edited educational periodicals and established a venture promoting correspondence courses for young women denied opportunities for formal education; he taught at a school for foreign students in Tokyo and developed textbooks for the Ministry of Education.

He was an early advocate of the idea of community studies, which he felt should be accorded a central place in public school education. He engaged in exchanges with a number of prominent researchers involved in developing the systematic study of local communities and cultural practices.
It was as the principal of a succession of elementary schools--including some in the poorest areas of Tokyo--between 1913 and 1932 that Makiguchi refined his educational theories into practical form.

As an educator, Makiguchi was devoted to the happiness of children, and worked assiduously to ensure that economically disadvantaged children were given equal opportunities. His approach repeatedly led him into conflict with local politicians and vested interests, and he was frequently the target of attempts to oust him. Nevertheless, the schools of which he was principal, especially Shirokane Elementary School, became renowned for the high quality of the educational experience they offered. 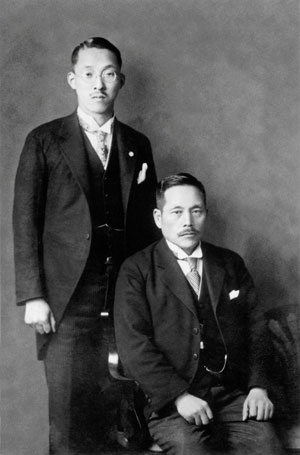 As Makiguchi approached the age of 60, his life reached several key turning points. In 1928 he embraced Nichiren Buddhism; in 1930 he published the first volume of The System of Value-Creating Pedagogy, and in 1932 his long teaching career came to an end.

With Josei Toda, 1930In Nichiren Buddhism and the teachings of the Lotus Sutra, Makiguchi found a deep resonance with the ideas he had been developing throughout his life, the ideas that form the basis of The System of Value-Creating Pedagogy.

Prepared for publication by his protégé, Jogai Toda (who would later change his name to Josei Toda), the four published volumes of The System of Value-Creating Pedagogy were compiled from copious notes Makiguchi had kept throughout his career. It outlined Makiguchi's ideas about the nature of value and about how education should serve to enhance learners' capacity to create value (happiness) from the challenges and opportunities life presents.

The first volume was published on November 18, 1930, and this date is now considered to be the date of the establishment of the Soka Kyoiku Gakkai. This organization, which after the war was renamed Soka Gakkai and has become Japan's foremost association of lay Buddhists with adherents throughout the world, was originally intended to promote the reform of education along the lines advocated in The System of Value-Creating Pedagogy, but over the decade of the 1930s developed into a movement to reform society through the promotion of Nichiren Buddhism.

Makiguchi dedicated himself to the activities of the Soka Kyoiku Gakkai and, increasingly, to the propagation of Buddhism, traveling widely throughout Japan to hold meetings and encourage members.

Less than a year after the publication of the first volume of The System of Value-Creating Pedagogy, the so-called "Manchurian Incident" marked the start of Japan's military incursion into China, leading ultimately to its disastrous involvement in World War II. As the militarist authorities tightened their grip on all aspects of life in the promotion of the war effort, they increasingly sought to enforce state-sponsored Shinto practices, centered on the putative divinity of the emperor.

Makiguchi's religious activities soon attracted the attention of the authorities, and attempts to suppress the movement gathered force. Ultimately, pressure was placed on Makiguchi to accept and instruct the members of Soka Kyoiku Gakkai to accept a religious talisman demonstrating adherence to the cult of imperial divinity. When he refused to do this, he, Toda and senior leaders of Soka Kyoiku Gakkai were detained by Japan's Special Higher Police and confined to prison in July 1943.

Already in his seventies, Makiguchi was subjected to harsh interrogation and extreme hardship as the authorities sought to force him to recant his beliefs. Although most of the imprisoned members of Soka Kyoiku Gakkai did in fact recant, neither Makiguchi nor Toda would yield. Makiguchi died of malnutrition and old age in prison in November 1944.

His closest disciple, Josei Toda, was released from prison in July 1945, just weeks before the end of the war. Toda went on to rebuild the organization he and Makiguchi had founded, renaming it the Soka Gakkai.

Makiguchi's educational ideas have been implemented by Toda's successor, Daisaku Ikeda, who has established a network of Soka schools from the kindergarten to post-graduate university level in Japan and throughout the world. Makiguchi's theories of value-creating education have inspired a growing body of research as well as innovative projects around the globe.