Gohonzon is a Painted Scroll

In the Nichiren Buddhism, a Gohonzon refers specifically to the

"script mandala" or "mandala written with characters”.
​
The written characters are in traditional kanji characters and two Siddham Script.

​of a hanging paper scroll. 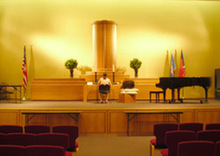 Buddhism in Japan The Gohonzon (ご本尊? or 御本尊?) is the main object of devotion in most Nichiren Buddhist organisations. In Japanese, go is an honorific prefix indicating respect and honzon means "object of fundamental respect, veneration, or devotion".

Generically used, a honzon refers to any such object of devotion in the scope of Buddhism in Japan, whether a statue or set of statues, a painted scroll, or some other object.

However, in Nichiren Buddhism, a honzonor gohonzon usually refers specifically to the moji-mandala (文字曼荼羅 "script mandala" or "mandala written with characters") that is the object of veneration in various Nichiren schools.

The Moji-mandala gohonzon, or the "Mandala gohonzon" (曼荼羅御本尊), is the primary object of devotion in Nichiren Shūand some other Nichiren schools, and the exclusive object of veneration in the Nichiren Shōshū branch and formerly affiliated groups such as Kenshōkai, Shōshinkai and Soka Gakkai.

Nichiren-school gohonzons feature traditional kanji characters and two Siddhaṃ scripts intended to express Nichiren's inner enlightenment. Most prominent and common to all such gohonzons is the phrase Namu Myōhō Renge Kyō—the primary mantra in Nichiren Buddhism—written down the center. This is called the daimoku (題目) or shudai (主題, "title"), around which the names of various Buddhas, bodhisattvas, persons of the Two Vehicles, personages representing the Ten Worlds, and
Buddhist and indigenous-Japanese deities are arranged hierarchically.

The names of deities believed to protect the Buddha land, called the Four Heavenly Kings (Bishamonten, Jikokuten, Kōmokuten, and Zōjōten), further occupy the four corners, and Sanskrit characters depicting Aizen Myō-ō and Fudō Myō-ō are situated along the left and right outer edges. Each of these names represents some aspect of the Buddha's enlightenment or an important Buddhist concept.

Nichiren Buddhist gohonzons are initially inscribed in ink on paper and are usually kept in the form of a hanging paper scroll.

​In some schools, the inscription of gohonzons intended for long-term enshrinement, such as those in temples, is often transferred to a wooden tablet into which the inscription is carved. The tablets are coated with black urushi and the engraved characters gilded.

Gohonzons are almost always dated and have a dedication, sometimes naming the person for whom or purpose for which they were inscribed or even the person who asked for their inscription.
The first gohonzons of this sort were inscribed by Nichiren[1] during his exile on Sado between late 1271 and early 1274. The specific names of the Buddhas', bodhisattvas', and other figures' that appear on a gohonzon depend on when and for whom Nichiren inscribed it.

Gohonzons personally inscribed by Nichiren feature his name: His early ones have the name to the left of the daimoku, but the name on the ones from later in his life gradually moved to be directly underneath the daimoku.

This is because in Nichiren Shōshū, only the high priest has the authority to inscribe gohonzons, which are transcriptions of the Dai Gohonzon, a specific gohonzon that Nichiren is believed to have inscribed on the 12th day of the tenth month of 1279.

The Dai-Gohonzon has Nichiren's signature directly beneath the daimoku and is considered to be the physical embodiment of Nichiren's enlightenment and his life as the True Buddha, as well as the ultimate purpose of his advent in this world. This interpretation of the gohonzon's significance distinguishes Nichiren Shōshū from other branches of Nichiren Buddhism.

The Object of Devotion Before the Gohonzon

All schools of Buddhism accept that the Dharma, being the Buddha’s teachings about life, is the path leading to enlightenment. In order to follow the path of the Buddha, practitioners must devote their life to the Buddha’s teaching. To facilitate focus in religious practice, an Object of Devotion embodying the spiritual essence of the Dharma is enshrined.

For hundreds of years after the Buddha’s passing the statue of Shakyamuni Buddha was adopted as the object of embodiment of the Dharma. However, while the physical features of the Buddha’s person in a statue are easily observed by practitioners, the spiritual essence of the Dharma was not visible, because of the intangible nature of teachings.

To get around this problem, and include the Dharma in the Object of Worship, some schools of Buddhism placed Sutras – indicating the Dharma – before the Buddha’s statue or put copy of the Buddha’s teachings (Sutra) inside statue.[2] Combining Statue and a Sutra indicates the oneness of Person and Dharma, being the principle which leads to enlightenment.

Other forms of objects of worship were also used during prayers such as paintings of Buddhas and Bodhisattvas as well as coloured mandalas. In the view of Nichiren, a Buddhist reformer of 13th century Japan, statues and paintings were convenient for practice in the past period of Buddhist calendar,[3] while in the current era (Latter Day) a mandala manifesting the Oneness of Person and Dharma will appear, named the gohonzon, or the“Great mandala": “This Gohonzon shall be called the great mandala never before known” [4]

Interpretations of the identity of this Eternal Buddha vary between schools, and most accept that it is simply Shakyamuni Buddha, though Nichiren Shōshū claims it to be Nichiren and SGI view it as the inherent Buddha nature. In his writings, Nichiren explained that the Eternal Buddha appeared together with the Bodhisattvas and the Treasure Tower, and that the Object of Devotion should include all, and not only Shakyamuni Buddha, as he inscribed in the gohonzon.[6]

Buddha Statue and Gohonzon as Objects of Devotion

Each of the Objects of Devotion implies a significant meaning for practitioners. In his letter "The Object of Devotion for Observing the Mind" Nichiren described Shakyamuni’s Buddhahood as that of the harvest (effect) :“Shakyamuni’s, however, is the Buddhism of the harvest, and this is the Buddhism of sowing”. Under the light of this statement, a statue of Shakyamuni represents the "Effect" of Buddhahood.

The gohonzon on the other hand represents the "Cause" for attaining Buddhahood. Another difference is that a statue indicates the aspect of the “person” but does not indicate the "Dharma" - or the Law. The gohonzon embodies both in the principle of the oneness of the Universal Law (Namu Myōhō Renge Kyō) and the Person (represented by Nichiren).

A third difference between the implication of Statue and gohonzon is that the gohonzon manifests the whole spectrum of the states of Mind (called the Ten Worlds of Life), while a statue represents only the world of Shakyamuni's Buddhahood. Nichiren describes the gohonzon as the object for observing the Ten Worlds: “The observation of the mind means to observe one’s own mind and to find the Ten Worlds within it” [7]

Handling and Treatment of the Gohonzon

Nichiren Buddhists treat gohonzon with utmost respect, since most of them consider the gohonzon to embody the "life" or "life condition" of the Buddha, and they generally avoid touching the gohonzon except for cleaning.

Gohonzon that have become soiled or damaged are returned to temples for ceremonial disposal.

Photographing and copying the gohonzon are also discouraged by certain sects (but not all) —photographing because the resulting copies can be easily desecrated, abused, or misused (e.g., for printing or creating unconsecrated gohonzon, which are considered by temple-affiliated groups to be powerless to benefit those who venerate them).

Others, including independent (non-sect affiliated) Nichiren Buddhists, cite Nichiren's own admonition about the gohonzon: "Never seek this Gohonzon outside yourself. The Gohonzon exists only within the mortal flesh of us ordinary people who embrace the Lotus Sutra and chant Namu-Myōhō-Renge-Kyō." For them, the paper gohonzon is a visual representation of the "Ceremony in the Air" described in the Lotus Sutra, and serves as a means of focusing on their own innate Buddhahood.

The Gohonzon Soka Gakkai members enshrine in their homes and centers is a transcription by the 18th century high priest Nichikan.[33] The characters down the middle of the scroll say "Nam Myoho Renge Kyo" and "Nichiren". Immediately to the right and left are the names of Shakyamuni and Many Treasures (Taho) Buddha. On the corners are the names of protective deities from Buddhist mythology, and the remaining characters are names representing the various conditions of life.[181]

They teach that by chanting Nam-myoho-renge-kyo to the Gohonzon one fuses one's life with the ultimate reality of all things.[182] It is the member's faith and practice that causes the scroll to become a "happiness machine"[33]:289 that allows one to examine one's life, gain benefit and ultimately attain Buddhahood.[183]

Josei Toda also taught that one must pray with the belief "that there is no distinction among the Gohonzon, Nichiren and you yourself."[186]

They has always believed that the efficacy of one's practice to the Gohonzon was free of dependence on clerical ritual, but refrained from expressing this while still connected to Nichiren Shōshū. Since 1991, however, the organization has taught openly that the Gohonzon is a reflection of the practitioner's own faith and practice.[187]

They chant the Daimoku to change their lives, including the environments in which they live.[189] The goal is to produce an inner change that becomes the motivator for social change. They teach that chanting cannot be divorced from action.[190]

​Thus, Buddhahood is experienced as the process of transforming, and as the actual transformation of, daily life.[193]Therefore, chanting daimoku is not approached as a passive exercise, as their literature urges practitioners to have "conviction", tenacity and perseverance and to challenge problems.[194][195]